Citizenship and Passports: Globalization and Mobility

The Crans-Montana Forum is one of my favourite events of the year. Less flashy than Davos, perhaps, but one that always brings together a group of interesting people and serious discussions. This week’s gathering in Brussels was no different. The session on Citizenship & Passports: Globalization and Mobility was chaired by Sam Bayat of the Bayat Legal Group and presented that without the industry’s power to attract capital, many small nations would face serious financial difficulties. It also highlighted the need for regulation; an action plan to make the citizenship by investment industry more sustainable. I’ve been in this industry for 15 years and I want to continue being in it for another 25.

Hon. Gaston Browne, prime minister of Antigua and Barbuda also shared his insights via video link, stating that Citizenship-by-Investment is a necessity for many countries in the Caribbean, as it provides between 15 to 40 % of GDP.

“If these islands were deprived of these programs, the population of each country would be faced with unemployment and poverty,” said PM Browne. “They would be unable to reach sustainable development goals. We think these programs are here to stay out of necessity. Losing them would plunge the region into poverty and risk displacing people. We want to promote and protect these programs.”

Sam Bayat pointed out that there are nine official programs throughout the world and an equal number of nations considering programs, including Armenia, Moldova and Montenegro. Emmanuel Nanthan, director of Dominica’s CBI program, stressed the stringent due diligence process that each applicant must go through, a view echoed by Nestor Alfred, CEO of Saint Lucia’s Citizenship-by-Investment Unit.

“We do extensive due diligence on every applicant,” said Mr Alfred. “We would not grant citizenship, even if third party says everything is clear, and we think there is a lack of intelligent information. We do not take it lightly and we cannot be reckless in the granting of citizenship to just anyone. There are quite a few myths, even among the local populations.”

Cyprus has been one of the industry’s biggest success stories. In 2013 it faced a fiscal and banking crisis. In less than five years, it has turned this situation around.

“We needed investment, so we turned to a residency program,” said Averof Neofytou, president of the Democratic Rally party of Cyprus. “We also have very strict requirements for applicants.”

According to Mr. Nanthan, without the CBI program, Dominica would not have recovered from the effects of Hurricane Erica. There is still, however, a legitimate concern that an industry which helps keep many countries afloat, might be stifled.

Concurrently, it was interesting to hear from Philip Kerfs, head of International Cooperation at the OECD, that his organisation only came across the industry by accident. Since then, many such organisations have been intrigued by the development of this industry.

I think it’s important that we don’t forget about the 20,000 families a year that are becoming citizens of new countries. They are discovering the power of freedom and mobility. But they represent only 0.05% of the total of annual migrants. These rich migrants, who invest a potential US$20 billion to their new countries, can further their contribution with an additional 2% percent, which could bring an additional US$350m to the nation every year.

Migration continues to remain a contentious issue in Europe. As we were discussing solutions in one part of Brussels, Europe’s leaders spent 10 hours in another, discussing the same thing. Finally, it was agreed upon that certain EU countries will take in migrants rescued from the Mediterranean. As it stands, money remains a big issue. I am certain, that with the contribution of the citizenship industry, a positive change is foreseeable. 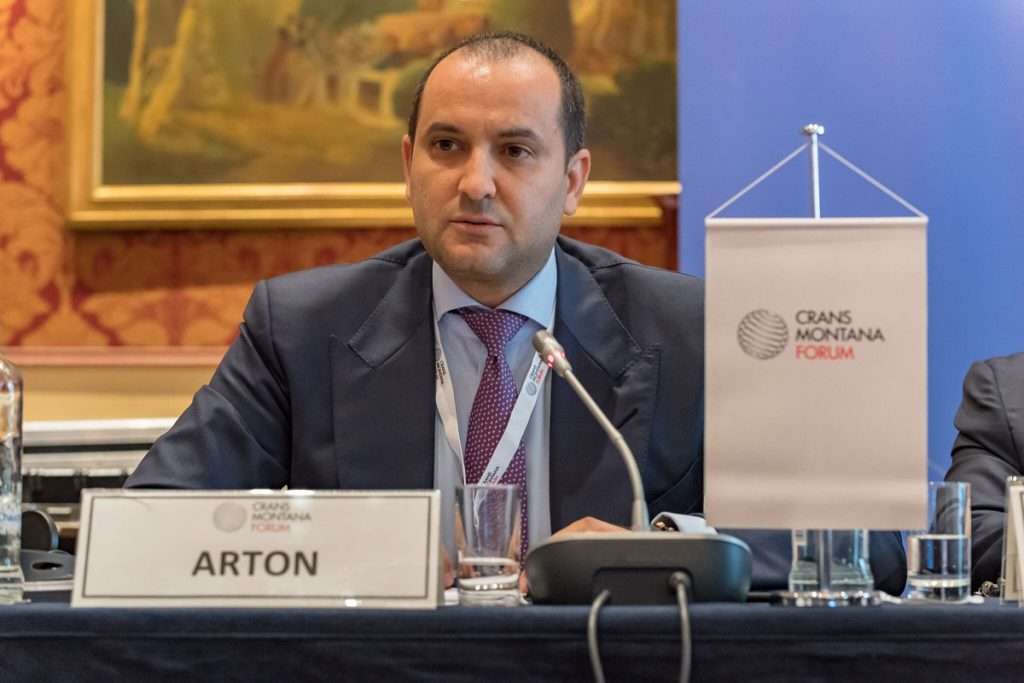 Armand Arton speaks at the 29th Annual Session of the Crans Montana Forum, in Brussels.

Positive Impact by a Positive Planet

The Most Curious Passport